The Dead Author's Podcast is a rare gem; a short-lived (in podcast terms) series recorded in front of a live audience in which the excellent Paul F. Tompkins — playing the role of writer and time-traveler H. G. Wells — uses his famed time machine to collect now-deceased authors from their living years and bring them to the present day to be interviewed about their works. The other authors are played, frequently brilliantly, by an assortment of comedians and well known comedy actors. 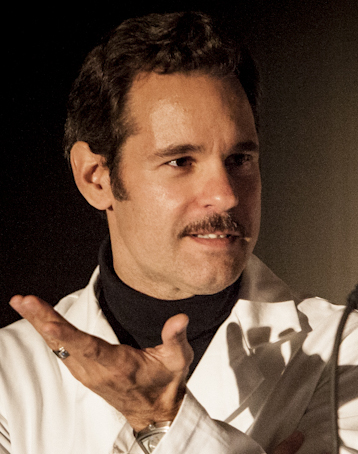 It's a simple premise: an out-of-time author interviews other out-of-time authors about their lives and works, but it's handled so deftly by both interviewer and guest that it manages to be simultaneously educational and hilarious. There are numerous stand-out performances in the around 50 episode run, but a few of my favourites are listed below.

Ayn Rand's appearance on the podcast is a tour de force. John Hodgman embodying the objectivist novelist storms on to the stage and steamrolls Tompkin's Wells with lengthy, demented diatribes about her philosophy, her sexuality and her disdain for the TV show M.A.S.H. Wells struggles to get a word in edgeways, but Rand's insistence on putting her own desire to speak ahead of his is absolutely note perfect. It's a wonderful performance.

I have no idea how many engrams Andy Daly had to cleanse to master this level of Hubbard. It's so good that he's the only author to get a repeat visit within the show's run. Daly comes out from the start mixing a clearly well researched take on the sci-fi cult leader with a truly Johnsonian ability to lie and embellish on his feet. How many of the lies are Hubbard's how many are Daly's is impossible to discern, his performance nails his subject so well that the line isn't visible. The interview covers everything from his early writings, to his fictional war injures, to his Qarmy medals and his chancellorship of Arby's. He's unrelenting, a truly Munchausenesque barrage of tall tales and preposterous claims, even Tompkin's Wells cracks a couple of times in the face of his ludicrous assault. Just fantastic.

If you'd like to listen to all the episodes I built a quick and dirty index site of all the podcasts that you can browse chronologically or by guest (both actor and author).